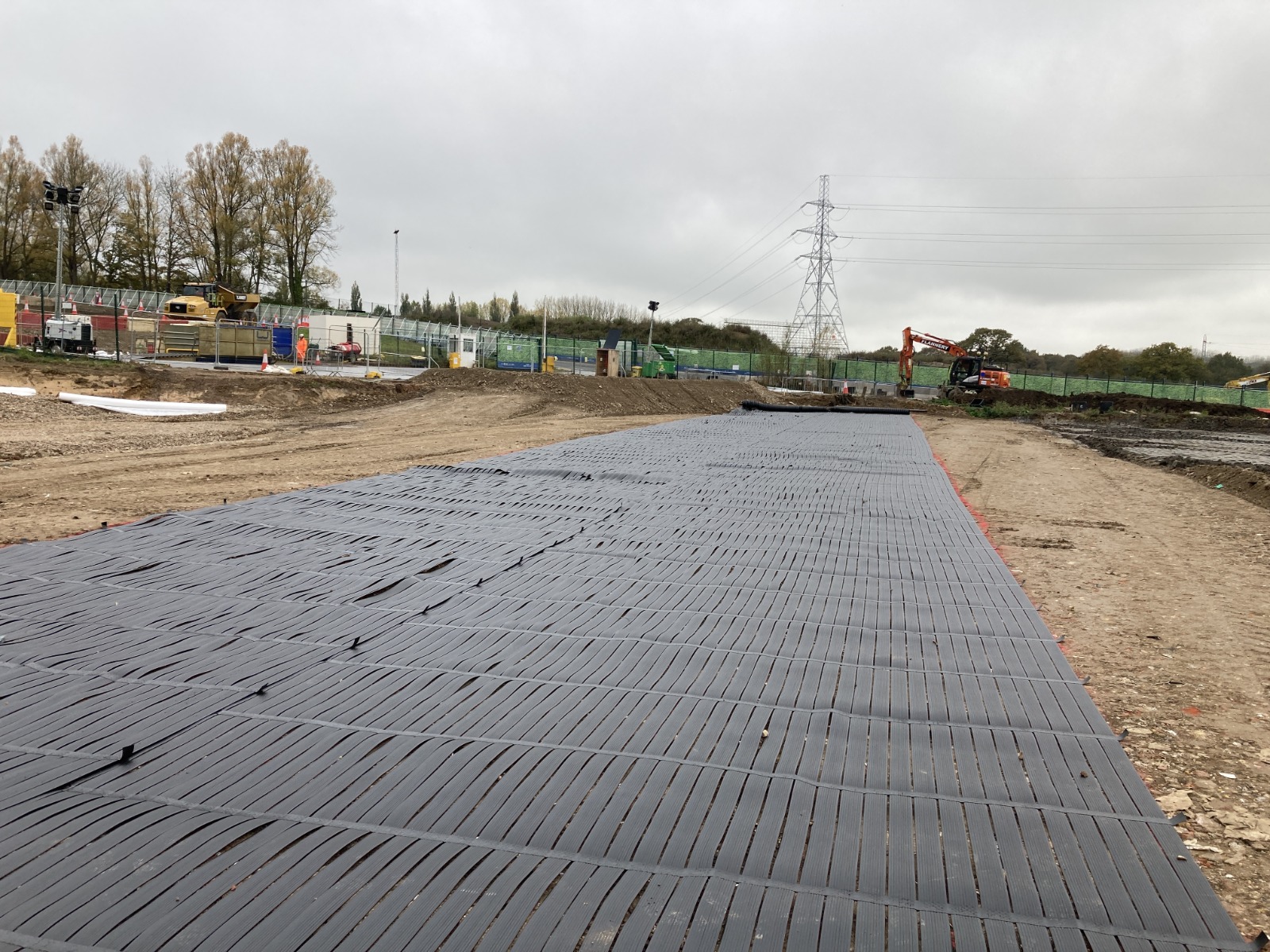 SCS Railways (Skanska Costain Strabag JV), requested that Tailor Engineering carry out specialist element design for high strength basal reinforcement geogrid to be placed between embankments over soft soils (undisclosed locations). The embankments were reinforced with a single horizontal layer of high strength uniaxial geogrid (1,200 kN/m) placed at existing ground level. The embankments above the geogrid were constructed from a combination of Class 1A and Class 2A/2B fill.  The embankment cross-sections were analysed in accordance with Section 8.3: Reinforced embankments over soft and very soft foundations soils of BS 8006-1:2010+A1:2016. The embankment was taken as Category 3 in BS 8006-1:2010+A1:2016 and the partial factor for the ramification of failure, fn, was taken as 1.1.   The following limit states were considered in this analysis: local stability, rotational stability, lateral sliding, foundation extrusion and reinforcement strain. 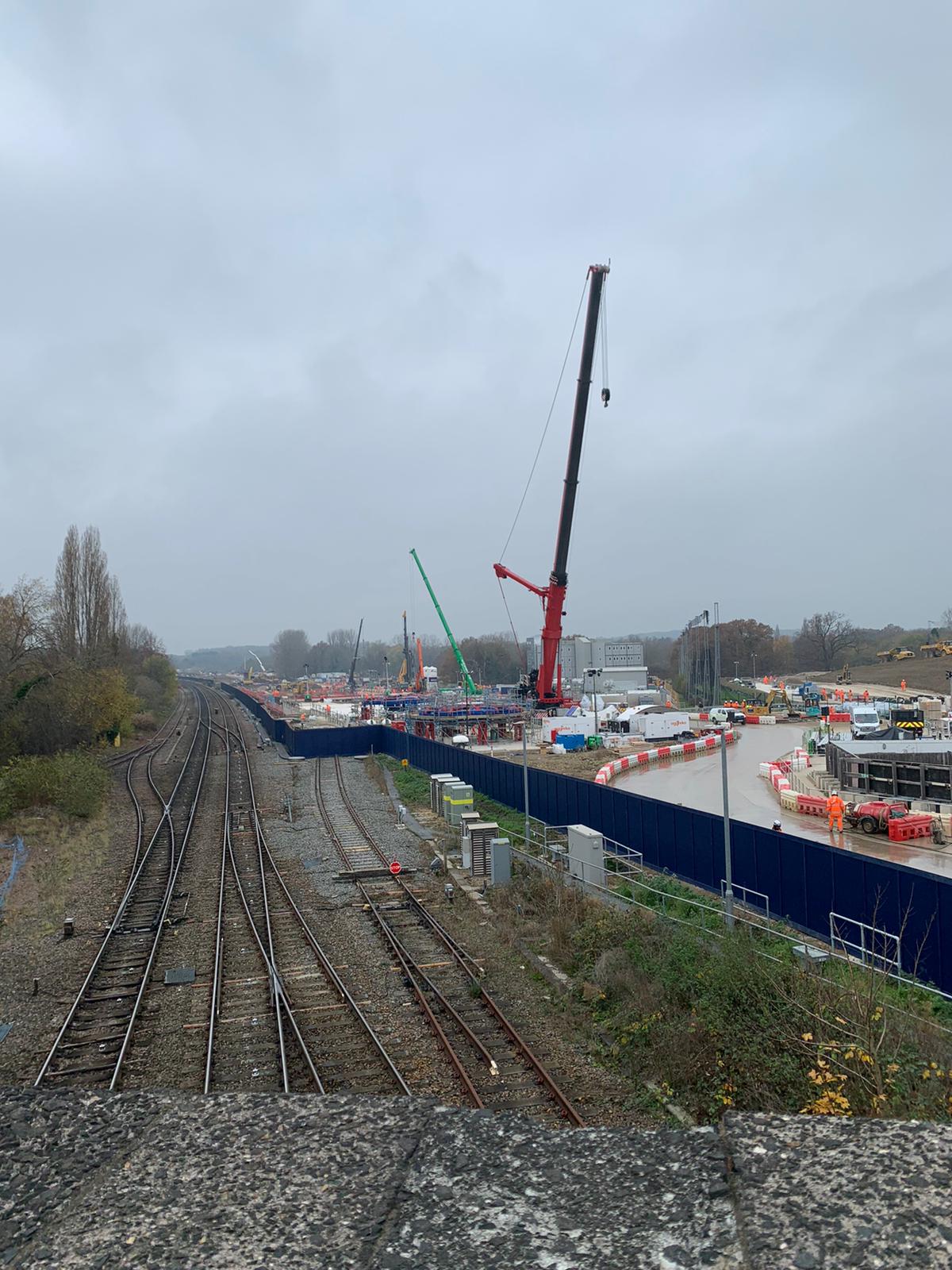 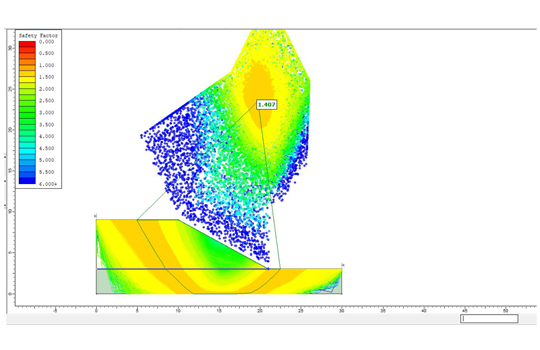 Rotational stability was checked using Roscience Slide 2 to preform slip circle analysis. Janbu’s method was used in the stability calculations. Three conditions were considered: 1) the short-term, undrained, condition using undrained shear strength, were appropriate; 2) the long-term, drained, condition using the peak/critical state angle of friction and cohesion; 3) the long-term, drained, condition using the residual angle of friction and cohesion. Local stability, lateral sliding and foundation extrusion were checked using BS 8006-1. Only the short-term condition using undrained shear strength, were appropriate, were considered in the analysis.   Reinforcement strain was checked using the short-term stress-strain curve given by the selected product technical data.   The anchorage length was determined in accordance with Clause 8.3.2.5.2 of BS 8006- 1:2010+A1:2016. The reinforcement load, Troj, needed to maintain stability at the section was taken as the long-term strength of the reinforcement, namely the characteristic strength divided by the material reduction factors and the partial factor on the ramifications of failure. In this design it is assumed that the basal reinforcement will be in contact with granular fill both above and below the reinforcement layer, resulting in drained friction between the reinforcement and the soil.   The location of the critical slip circle in the short-term and long-term (residual parameters) analysis passes behind the location of the basal reinforcement and no anchorage length is reinforced for these cases.